Thanksgiving was at my sister and brother in laws', they do a fantastic job and opening their home to their family and friends. One of Shaina's friends is a post operative transsexual. Nice lady, makes a mean hummus....but here's where I was a social buffoon.....I was relaying, what I thought, a cute Jake story. When he was younger he didn't quite get that men and women are different, and called the female 'private' area, "where your penis should be" well I screwed up the story and looking straight at Shaina's friend, I said "where your penis USED to be" . Color me fiery freakin' red....I quickly looked away, mumbled the correct phrase and realized (after a moment of silence from our side of the table) even that wasn't as funny for this particular audience as I thought it would be and promptly started another conversation with other people at the table.....I should not be allowed to speak! I could blame it on the vicoden...(oh yeah, bad case of TMJ, according to ER doc, I have an appointment next week with the dentist, I'm not ruling out some weird tumor at my temple, but I tend toward extreme flights of medical fancy at times), but it should have worn off by then....oh well.

We brought our camera but did not take any pictures. I did, however, take pictures of Hannah getting her Thanksgiving bath. Poor girl is not particularly fond of bathing. 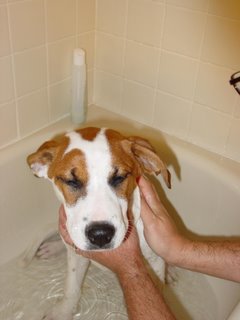 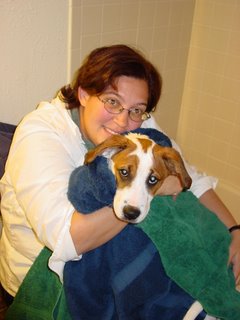 Oh look, I cut and colored my hair...quick Papi, go get Mom, she won't believe it.

Might I be the first to say The Zimmer dames look mighty fine in that photo! Cute hair cut Tracey! Can't wait to see it live and in person...

why thank you ms martha!

Jose told me I needed to check our your blog, as the dog was "giving a Daphne face" and that you said something funny at Thanksgiving. I've found both to be true- excellent!

Best of luck with the trick jaw you've got there. Sounds icky!