It is really really hard to eat out during this challenge. Yesterday we took a group of kiddos to Casa Bonita to celebrate Jake's and a couple others 10th birthdays (yes, his real birthday was a few months ago.....with studying for the boards, Jason's Achilles' tendon deal, looking for a job, Isaac being on swim team and Jake doing baseball....I was a little out of my mind this summer...and now it's Isaac's birthday and Jake pleaded, cajoled and guilted me into making sure I had his birthday BEFORE ISAAC's....and Isaac's is, oh TODAY.....argggg...anyhow, the kids have forgiven me, I hope to forgive myself in the next twenty or so years). Those of you not from Colorado, or ever been here, Casa Bonita is a, ahem - well, an experience. You don't go there for the Mexican food. Truthfully, you could get better Mexican food in a remote Canadian village. I kid you not when I tell you that you could taste the plastic in the cheese. But they do have bottomless sopapillas and lots of honey. Side note: we may have built up the sopapilla factor because when Isaac picked up his first ever, he said, 'what's the big deal, this is just bread!' As soon as we pointed out the honey, he became more satisfied. Anyhow, the point.....there was nothing, NOTHING I could order and you HAVE to order to get in. So I decided to go more vegetarian then vegan and ordered the cheese enchilada platter that came with two beef enchiladas....took one bite of the cheese enchilada....GAROSS (do NOT remember the food being that disgusting when I was a kid????) and so pretty much paid $11.95 for some rice and beans, and of course sopapillas. The company was great (the moms from coffee club, and Jason, who we called Big Love for the day), the kids (13 in all) had a wonderful time so it was all well worth it in the end. This may sound like a bad review, but seriously, Casa Bonita is a place you have to experience at least once in your life....order the taco salad, the meat comes on the side...if I had only known....

And now today....Cloudy, With a Chance of Meatballs....with some seven year olds....at the Movie Tavern. Again, nothing, NOTHING to eat if you're doing a stupid-vegan-Dr.-Oz-freakin'-sadist-challenge. So, again went more vegetarian and had a gross cheese pizza with a wilted dinner salad. The kiddos tried the special meatball pizza in honor of the movie. Oh and by the way, ADORABLE movie. Although, the main character reminded me a bit too much of Isaac...in all of his quirkiness. The kids enjoyed it.

Lessons learned....lentil soup is actually sounding better and better (holy cow did I just type that and MEAN it?). I need to get more organized. And going Vegan is really really hard!

Some shout outs to those who have been blogging and have written some funny stuff -- to make up for me being so BAAAD at blogging: 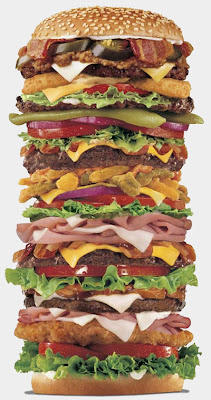 I really want a hamburger....

yup, that about sums it up!
(photograph from foodfacts.info.com)
Posted by tz at 7:44 PM 4 comments:

OH MY GOSH...it's been awhile, I know. I've been trying to get a job....and get this-- that whole nursing shortage IS A MEAN BAD JOKE! Well at least in Denver. I'm taking a couple days off of the whole looking thing and think I may do this: Dr. Oz's 28 day Vegan challenge Hey, if this meat and potatoes hardworkin' cowboy can do it....then I should be able to do it too....well in theory. So I started the day with my Latte but had them make it with soy milk and did NOT use any sugar or sugar substitute, then had some whole wheat toast with almond butter and an apple for breakfast. So far, not bad, but then I'm only in hour 12 of the 28 DAY challenge. If any of you out there have any vegan recipes....hand them over!

I wonder how Jason's going to feel about this?

Whatever, he can have meat at lunch.

Anyhow, this and maybe some kick boxing....I have to get into shape...one of the jobs I've applied for is in the Department of Corrections, where part of the job descriptions states, 'needs to kick above the waist and be able to use a baton in a striking manner' ..... never thought I'd see that for an RN position, but hey, I guess empathy isn't one of the major requirements for prison nurses.

Keep me in your thoughts and prayers and if you hear of any RN positions in the Denver area, keep me in mind!
Posted by tz at 12:06 PM 9 comments: