What if Wavecloud were around? Movie Review - The Words 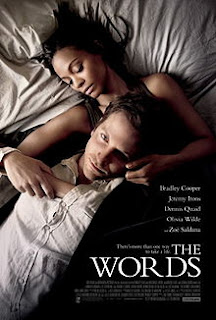 What if a self-publishing company like Wavecloud (yes, my husband works there -- but it's still a really good company) was around?  Would the author in this movie done what he had done?

What was this movie about? Well, let me tell you...it's about an author, who painstakingly writes his first manuscript.  He lived that author's lifestyle of a tiny New York apartment, borrowing money from a working-class father; a father who would say "this is the last check" while encouraging his son to get a real job.  The author had a beautiful girl friend (like way too beautiful, and while we're at it, the author was way too beautiful too) who believed in him, never asked him to get a real job and who loved him whole-heartedly.  If you're an author, you're probably thinking this is awesome!  Or maybe, although he may have thought he was struggling , he didn't have enough pain/struggle/adversity  needed to make his book "great".  The feedback from publishers were his book was good, but not great enough to be a break into the world of published books.  An aside here, because I always end up looking at how homes are decorated in movies -- their tiny New York apartment with peeling paint and a curtain for a bathroom door...had brand new stainless steel appliances -- really?

So, like all failed authors (right? -- they don't become nurses, or lawyers, or something normal with a good pay check) he finds work in the mail room of a publishing firm (with other failed authors who have given up and started to write science fiction novels).  Apparently being in the mail room gives you the income needed to marry your beautiful girlfriend and take a trip to Paris (because Paris is so cheap -- sarcastic tone inserted here). They linger at some plaque about Hemingway, author looks sad -- I think because he realizes he's no Hemingway. Then they go into a antiquey vintage-like store -- since there were things like old phones and a brief case from the 40's it's more of an antique store in Colorado...where we have no idea what antiques are because in the scheme of history we are so recent but not so much antique like for a place like Paris, which has been around for like evah! Anyhow, in this really cool looking satchel briefcase there is a manuscript (and, by the way, what does a mail room clerk need with a brief case...wifey is so freakin' supportive)-- that the author finds when wifey isn't around.

And apparently it's a beautiful story.

It's about loss and love.  I think, all of that is implied you really don't know the exact story...you find out what prompted the story, but you don't know the actual story.

And it's a best seller, because this author retyped it and took it to his publisher who loved it and published it.

Because he had this best seller...the book he actually wrote gets published too.

THEN....dum dum dum (sing that in a way that we're just about to find something amazing out) the REAL author tracks down the fake author and tells him the story.  It's tragic.  But not really because lots of us have had loss -- apparently, his writing about his loss was so much more supremely tragic since it was in the beautiful back drop of Paris.  And loss in Paris is more tragic and note worthy than say loss in Kansas.  It does leave you wondering (well kind of pounds it into your head, just in case you couldn't pick up the subtle cues). The real author's true tragedy was not the loss that spurred his book, but the loss of that book (oh and there were visual references to Hemingway in his story-line as well -- I think we're supposed to think this whole story is very Hemingway-ish -- which I couldn't actually say it was, since I've never read Hemingway, which basically makes me suck as an English major).

The real author doesn't really want anything.  He just wants the fake author to know he knows he's a fake.

And it drives the fake author bat-shit crazy.

Loses wifey.  Probably because of his own guilt, maybe because of wifey's disappointment? It's never clear (and I really don't think it needs to be clear, it's not clear in real life either when people break up).

Writes another book about faking the first book, becoming a success on a lie, and going bat-shit crazy. Hot grad student makes her way into his life.  Oh he's old now...but still fabulously good-looking and has an awesome house with modern design and walls of windows overlooking a great city skyline -- because everyone knows you can become crazy-rich and so famous grad students want to sleep with you after writing a couple of books.

Is this all real?
Is it all fiction?

You get to decide.

Back to my first point. My super hot husband (okay, I think he's hot because I find humor, brilliance and green eyes super hot) works for this great company called Wavecloud. Not only do they sell e-books, they are working towards promoting authors who self-publish.  So if you're an author, who has been told 'no' by those big bad mean publishers who only want to publish people who have already been published, you have a place to market your own self-published work.  They aren't there yet, but Wavecloud wants to be that place where authors and their public develop relationships.  Where people have access to books of all different kinds, not just traditionally published ones. A place where new voices have a chance to be heard (okay, technically read).  It's exciting -- I think.

Oh...movie was worth the 4.99$ rental on On-demand. I'm still not sure I liked it, but not sure I disliked it either.  It did make me think about it and even write about it.  I can see why it didn't make it on the big screen, it was much too cerebral....there was not one gun or naked scene...which I felt was a nice change of pace.
Posted by tz at 7:44 AM No comments: