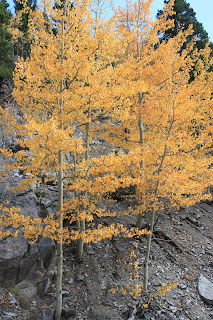 Sigh....This year just got away from us and we missed peak Aspen changing season.  To get the idea of what peak Aspen season looks like take a look at last year's day trip.  We caught a tree here and there, but we didn't get that "wow" and "woo" you get as you drive along the pass when you are enveloped by gold. 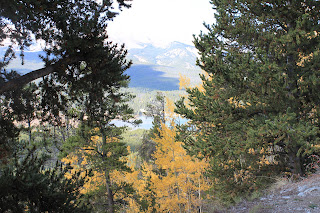 Boreas Pass, connects South Park to Breckenridge. We like to get there via 285, end up in Breck and have lunch in our favorite place, The Motherload. Then we take I-70 home. The picture above is on the Breckenridge side of the Pass. 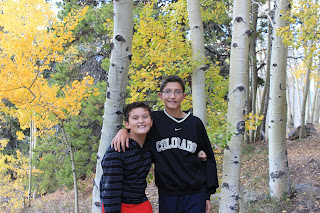 And if you clicked on the link from last year you'll see nothing has changed with my children cooperating with giving me a great picture...The elder made me promise not to post on Facebook. However, he never said anything about my blog.... 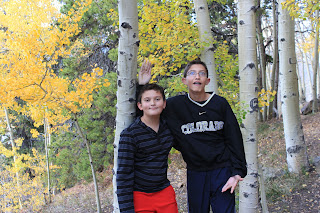 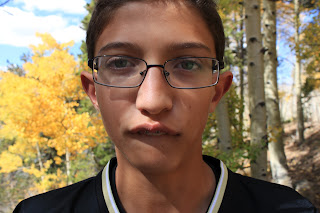 Younger one, punching older one pretty much ended the photo shoot and who was I kidding, it was over before it started. They of course both laughed hysterically.  Boys are so weird. (He didn't punch hard, it was more shock value). 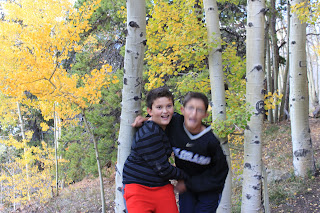 Breckenridge...great mountain town.  We feel blessed to live is such a great state. It's beautiful even if you miss peak season. 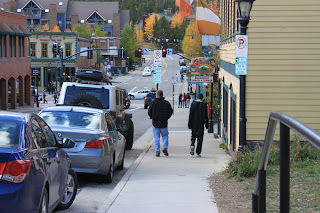 Part of the reason we're so busy all the time is because of the kids and their sports...the week before Isaac had a karate tournament, Jake had practices and games (baseball).  Jake had practice at 3pm yesterday, so we started our day out at 8....I kept asking Jason if it was a good idea to stop for lunch and he kept telling me not to worry, it's only an hour back.  Just before we ordered dessert, I assured him I thought he right, but could he check again any way.  He got on his phone and says, "hmmm, it says two hours -- strange, it must be wrong"  That's my husband.  The kids pouted for a second (because they fell asleep) because they couldn't get the indoor S'mores -- one of the main reasons to go to the Motherload. But we got Jake to practice 10 minutes late (it took us an hour and 50 minutes to get home...hmmmm).

We finally finished Isaac's 'big boy' room.  He just turned 10 on the 20th (OMG, I can't believe he's ten already) and he really wanted a Karate style room.  He loves Karate.  I, however, envisioned a sleek modern Asian-style room.  It's not that I don't appreciate that aesthetic, it's just not my style.  So I combined the Karate theme with some Americana stuff and kind of have an Asian-Americana Fusion room going on.  Here it is: 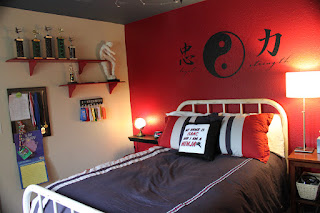 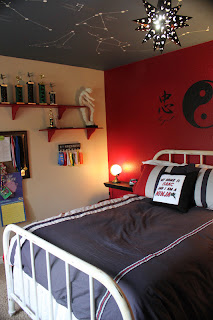 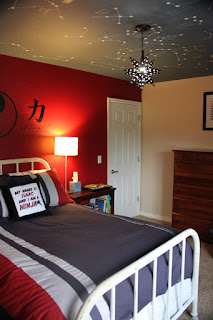 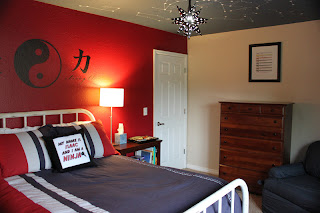 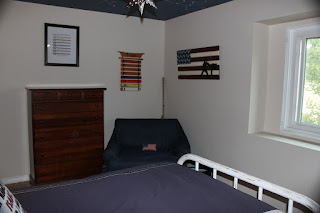 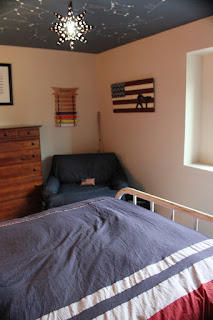 So these were the shots from the four corners of the room.  I'm pretty excited about it, except for the above wall...it's not quite to scale for the wall space...but I can live with it and Isaac has no idea. 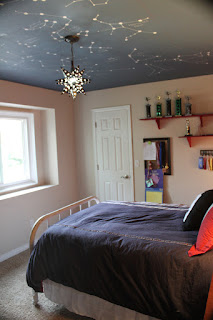 The ceiling and light are remnants from his old room, which was kind of a travel theme.  It's the constellations.  You can find the template here.  It took Jason such a long time to do this ceiling about 7 years ago that when I suggested we paint over it, I thought he was going to do violence.  So it stayed.  I like it though the colors are great and it's different.  Don't look too closely though, when I was writing out the names, I sometimes wrote them in the wrong direction...oh well. 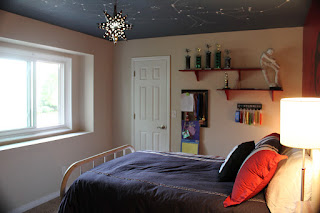 I found this Moroccan iron star light on Ebay a long time ago. It was actually a lamp, so Jason rewired it to be a light fixture.  Jason is awesome! He also had to put the wiring into the ceiling and attach it to the wall switch.  At first the light switch started turning off and on the hall light, but he figured it out pretty quickly and got it working. 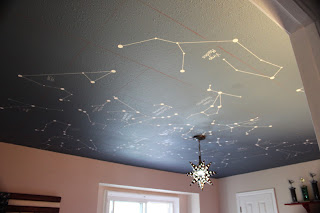 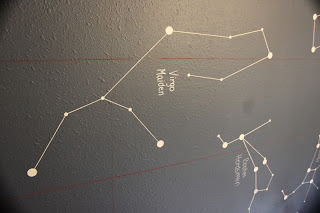 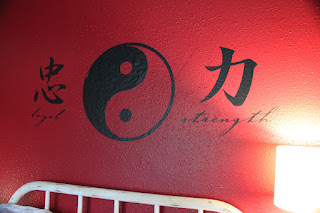 These are Upper Case Living wall decals. My friend Angela sells this stuff and I have it all over the house.  I admit this is my favorite so far! You can order from her (no matter where you live in the U.S.) from her website here. 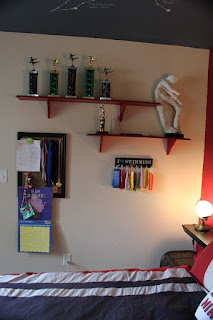 His 'brag' wall.  I'm not one for putting all the boys' trophies etc in the common living spaces. But it's nice for them to see their accomplishments. 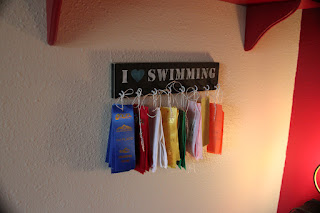 So he also swims....I thought a swimming room would be totally fun to do...but it is HIS room.  I found this fun ribbon holder here on Etsy I love Etsy. 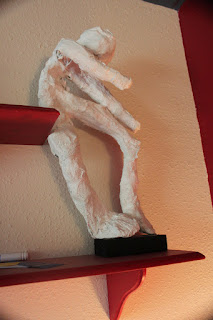 This is a sculpture he made of a Karate stance. Can't remember which one. It's a little lopsided and needs to lean on something to stay up. 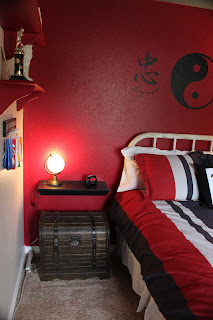 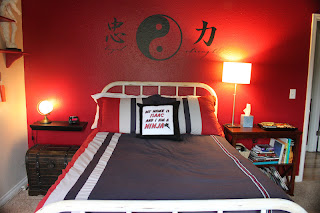 So the bed...that was one of those perfect place at the perfect time.  My friend, Shannon, and I try and make it to this really cool outdoor flea market called Paris Street Market a couple times during the summer.  For awhile I was going to go with a whole new bedroom set from Ikea.  I wasn't thrilled with it, but it was going to go with the colors and theme.  Then we saw this in one of the "booths" and I fell in love with it.  I was so afraid it was going to be too girly but Shannon said she thought it would work great.  So a quick trip to the ATM and this baby was mine.  Unfortunately, I had my Honda...but guess what (this is totally fate) my other friends, Kendra and Colleen also happened to be there and had a mini-van and lived a couple doors down from me. So we loaded it up in their van and they delivered it for me.  I love my friends. 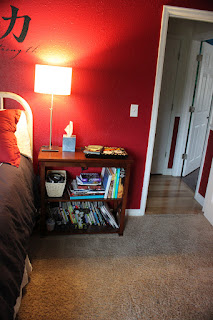 Found this shelf at Home Depot...it matched perfectly with the dresser Isaac already had. 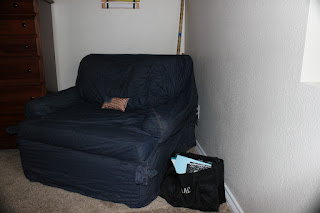 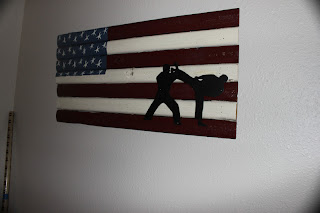 I found this wood fencing American Flag, also at Paris Street Market. Then found these metal Karate figures at this online artisan metal shop that I originally came across on Pinterest (freaking addicted, but got some great ideas for Isaac's room. Anyhow, Jason attached the Karate guys to the flag... 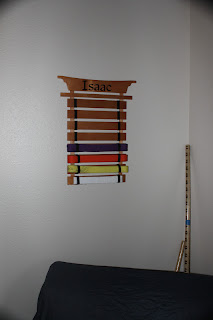 Simple belt holder we bought for him last Christmas.  His bow-staff is in the corner there. 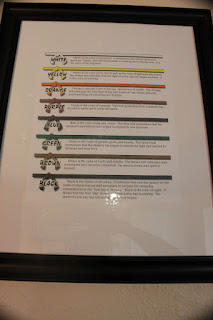 The dojo where Isaac studies Karate (Z-ultimate) has what each belt color means hanging on their wall.  They let me take it out of their frame, copy it at a copy center so that I could frame it for Isaac's room. 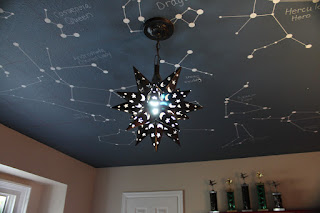 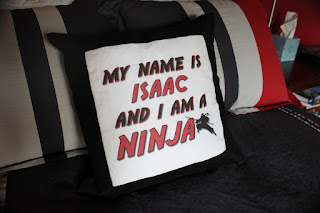 Next post...will be how we did it all....and some of the mistakes we made...some really really big mistakes :D I might even post again this month, stranger things have happened.