Life is full of embarrassments, this is just one of those moments

I'm going to share one of those really embarrassing stories. Mostly because I have nothing else to write about...that is unless you really want to know about everything I learned at the Nephrology Nursing workshop I attended yesterday....no? Okay, this really is more funny; it's one of those embarrassing moments that will pop in my head from time to time (even though it was ages and ages ago) that simultaneously make me laugh and blush at the same time.

About 100 years ago, Jason and I went out with our friends Will and John (Yes, we were friends with a gay couple, way before Will and Grace made it popular, we were such trend-setters). We went to an improv performance of a small independent theater company that performed in this tiny dark theater on 17th ave (oh my gosh we were so cool in our 20's). Before the actual performance began, some guy was 'warming' up the audience by asking us questions and then the audience would yell out our answers collectively.

Where do you live?

What high school did you go to?

(an aside here, why isn't high school a compound word? It really should be...highschool, so much easier)

Everyone shouted out the name of their high school

Who was the first person you slept with?

I shouted
not everyone
just me 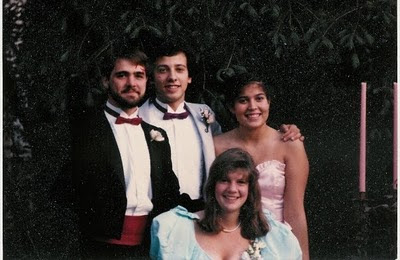 Our high school prom picture (not saying this the THE night)....Jason and I are in the back with the 'rad' eighties gray tux and pink satin dress -- and yes, it actually WAS the 80's -- so we come by that awesome dorkiness honestly.
Posted by tz at 4:27 AM 7 comments: