I was at the lab yesterday to have my blood drawn (thyroid issues, they suck).  The clerk there, may have been on crack or meth, I'm not sure how these drugs manifest themselves in the work place.  She was one of those women who was super rude, but with a smug smile so there was nothing to call her on, well at least out loud and in public.  Here on my blog I can say whatever I want.  It started with a couple who were probably from Mexico or a South American country.  The did speak English, but heavily accented.  She asked for their ID's.  I figured, that's something new I've been going to this lab every three months for two years and I've never seen that before. But no, only two people she did that with. She spoke slowly and loudly.  I didn't like that much but it's common enough for people to do when speaking to someone who has an accent.  Then she did the same thing to the well-spoken, fabulously dressed (the suit he was wearing probably cost more then a month of my salary) black man.  This guy was actually smart enough to make an appointment (I wish I had been that smart because I wouldn't have been in that waiting room for an hour watching all of this unfold).  Next was a little old lady who she took into the back room, but loudly (and slowly) berated her for not properly collecting her stool sample and then told her that she could make all of them all sick, so she needed to go to the public bathroom by the elevators to correct the problem.

The waiting room was standing room only, we all heard it.  I caught the eye of another woman in the room and I made the 'coo coo' symbol with my finger and she nodded her head in agreement.

The next person was a young, white, english with out an accent speaking person.

Then another elderly person came in with a question about which lab she could use on her insurance because she was getting a letter saying that this company wasn't on her insurance.  The clerk repeated that this was the lab she needed to use over and over again, using the same words, but more slowly and more loudly.  I was getting frustrated for the woman.  Finally the clerk called the insurance company and after the call, hands the woman her card and says, "It's just what I thought, you need to go to Q---, it's down the hall."

WTF, that's not what you were saying you crack-ho.

Just to add, every time she opened her mouth she slaughtered the English language.  I'm not saying I'm that great.  I have a BA in English, but the knowledge obtained during those years makes me realize how inadequate I really am.  It also helps me realize that some people are even more inadequate then I am...this clerk for instance.

I looked at the other lady in the waiting room, her eyes were round, lips pursed, much like my own.

Another young, white guy goes up.

Then she says, with frustration, "I can't read this name, the handwriting is too cramped".  I had no idea it was going to be me.  Why? Because I have great penmanship.  I mean people asked to use my notes in class because they could READ them.  I get compliments on my handwriting.  "Last name Zimmer?"

Holy crap, it was me.

I walk up there and she berates me for my penmanship.

I look at it, the signature on the sign in sheet before mine, cramped little handwriting, the one after mine pretty much a line.  Mine, clearly written, almost print.

You have to be effin' kidding me.

I smile, hand her my insurance card and orders.

She types away and then says to me, "if you come in again" (and I wish I could say that I didn't think that would happen) "and they can't find your name it's because I had to put it under Maria Teresa."  So I said, "I don't see a problem with that, because that's my name"

I didn't even muddy the waters by throwing in my nick-name of Tracey in there.

So in her slow, loud voice that she reserved for those who are black, elderly and accented speakers she said again, "Just....so....YOU....understaaaaand.....I....am typing....MARIA TERESA."

So the Maria-Teresa threw her off? Should I mention to her that My dad's family has been in this country since before the revolution, helped settle the West? That my mother's family, more recently to this country has a proud history of diplomats, lawyers and architects.  That both sides of the family have had people serve in our Army and Navy.  My brother is currently serving.  But my name, obviously gave her an idea of who I am and it was so wrong.

I so wanted to say, "look bitch, you aren't smart enough to be condescending so shut the hell up"

I'm such a coward.

The woman after me? Got a 'I'm so sorry you had to wait", got "your son is so cute" she didn't speak to her slowly or loudly.  She was a blond woman with a name like Jenn or something.  When she was done at the desk and turned around she caught my eye and crossed them and smiled at me....

Glad to know it was obvious to someone else too.

I found this really yummy recipe for jalapeno chicken on Pinterest.  It had this really awesome mild creamy flavor.  Even the picky nine year old liked it. 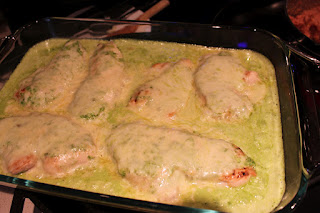 It's not healthy though, cream, whole milk, cheese, butter...you get the idea. 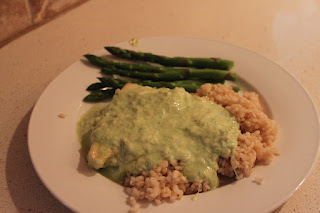 I did serve it with brown rice and asparagus to alleviate some of the guilt.  Visit just cook nyc for the recipe.  It's super easy too.

The other day when I was sick....I toggled between HGTV and the Food Network.  I was watching the Barefoot Contessa and she made these wonderful apple turnovers.  They were so simple and so tasty!  I served them for some company and not a crumb left on any of the plates...big hit.  You can find the recipe on the food network website. 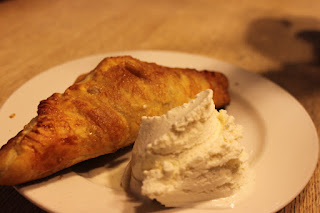 Spring break has officially started.  I can't tell you how excited I am to not be going to work tomorrow. I may be getting paid half of what I made as a dialysis nurse, but you can't beat the time off and having the same schedule as the kiddos.

If only I was done with school too then I could really relax.  I'm working on my final project this week while I'm off of work.
May 25th (graduation) can't get here soon enough!

Time for a letter, two in fact

Dear Little Ol' Lady with a Walker,
Please, dear God, use a cross walk.  I'm not fond of slamming on my breaks in the middle of a busy street as you meander across the road.  I get the feeling you feel like you've paid your dues and the rest of us can go f*&k ourselves because you're going to cross the street wherever you damn well please.  I get that.  I agree with it.  You are entitled, you've lived a long life, you've probably lived with deprivation, through wars, and you've probably lost a lot of people in your life.  You are entitled.  I just don't want to live with knowing I hit someone.  So it's not that I don't respect your life and your choices, I just don't want to be the one responsible for ending that life.  So, Please Please, use a cross walk and walk with the light.  I won't even be mad if I have to stay there awhile while you cross....I'd even smile and wave at you.

Dear A$$hole in the big diesel truck behind me,

Were you honking at the little ol' lady crossing the street? Because I'm pretty sure your honking wasn't going to make her move any faster.  Get over yourself already.  Were you honking at me? Because, as much as I disagreed with her decision, I wasn't going to run over her. That punishment -- doesn't quite fit that crime. Seriously, take a chill pill already, that whole two minutes was not going to affect you, you weren't going in a direction of a hospital, you didn't have a siren on you big ol' fancy truck, that I daresay hasn't even seen mud (you didn't look that tough) and there wasn't any other traffic, you could have easily swung into the other lane, that the little ol' lady had already gone through and passed us both.

You were just being mean.

Thanks,
Concerned Citizen
Posted by tz at 6:26 AM 3 comments: