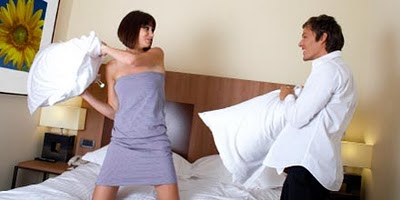 (picture lifted on coffedad.com blog -- pretty sure he lifted it off of someplace else)

It's been coming on for a couple weeks now -- snide little comments, sighs when things aren't done correctly, reprimanding me for putting the knife in the dishwasher after he told me he thought we should hand-wash our knives. These really little stupid things that I've been slightly hurt about, then simmering about, then after rolling them around in my brain started to even boil about it. I felt like I couldn't say anything because he's been helping so much around the house since I've gone back to work.
But, I had it, so I said something.....and he goes off on a list of my most horrible transgressions...I leave wet towels on the bed, I leave my shoes on the floor of the closet and don't put them on the shelf blah blah blah, I am, apparently the worse wife EVER....
so I calmly (and I so rarely get to use that phrase while describing myself) say, 'hey honey, I have a list about that long about the stuff that irritates me about YOU. I just choose to keep it to myself, because they don't mean anything'
pregnant pause
"Well, you should tell me, then we can criticize and degrade each other, it's how it's done....duh" and he comes over to me and hugs me.....
Which made me laugh.....
and now I'm not mad anymore.
Posted by tz at 7:33 PM 9 comments:

I'm not sure if it's because I'm not feeling well, it's the new year, it's coming up on the anniversary of my dad's death or I'm in the middle of some life changes right now, but I'm feeling quite reflective and this may bore you....but whatever, it's my blog.

My dad died 21 years ago right around the beginning of January, I was 19. He was living in New York and I in Denver, we met for Christmas in Washington DC that year. I had suspected he had been sick for quite awhile but he looked horrible when I saw him. I didn't want to tell him though or even mention illness. We pretty much just danced around the issue because diseases like that weren't discussed then, it wasn't really heard of much, and no one knew a lot about it except it was something that struck gay men. We had a good Christmas, my sister was there, my brother was there too (back round here, this is my brother from my dad and a friend of his, I also have two brothers from my mom and my step-dad -- my sister and I share both parents --- not your typical family structure). We all had a good time, hanging out, seeing some sites, shopping. The day after my brother flew back to Denver (I can't remember how old he was, but little, I'm not sure he was even in school yet), I saw my dad, on the couch, having a hard time catching his breath. I took a deep breath and said, "I know you're sick, I think you know it too, I think we should go to the hospital" (Um, this would be the WASP side of the family, if you couldn't already tell) He looked defeated at that moment. It's a hard look for a man who was 6'3, normally robust and full of life to pull off, but defeated, worn down and frail is how he looked. The friend with whom we were staying took us to the hospital. My dad was whisked behind the double doors and I filled out some paperwork. Except for a brief traumatic moment in the ICU, I never saw him again.
What seemed like an eternity and yet also seemed like just a few minutes....in some weird time stands still but speeds up kind of thing that you can't explain but some of us know what I mean....the doctor came out, hugged me (not a good sign) and told me that my dad wasn't going to make it. He needed to be vented. The doctor wanted to know if I knew what my dad would want in this case but his opinion was that there was no hope of recovery. At 19, I had to fill out the paperwork to pull the plug on my dad (FYI, way too young to make that decision!).

We went back to the friend's house and made calls. Family flew in from all over the country and my dad passed within a couple of minutes of his last visitor.

I spent the next couple of years being really angry at him. Angry at his being gay, angry that he was dead, angry at what a mess his life was, angry that he died of AIDS, something so dark and sinister (it was the 80's and I was 19, I would pause stutter and blurt it out, confused and embarrassed every time anyone asked what my dad died of, because the next question was always, 'how did he get AIDS?'--- I so know it wasn't PC to feel that way, but I did).

I wonder what he would have thought of my becoming a nurse, it's so far out of the range of what we ever discussed. What would he think of Jason and would he be proud that Jason and I have worked so hard in having a strong marriage. Would our marriage be so strong if I had had a father to run to when things got tough? I am saddened that my children will never know him. I am saddened that he never got to be a grandfather, he would have found so much joy, pleasure and wonder in the presence of his grandkids (he has five and one on the way --- according to my brother's Facebook page). If he was around, would my sister have made some of the harebrained decisions she made in her life? Would his influence have helped her in any way? My sister and I would have known our brother, instead of just having an another 'friend' on Facebook, we would have funny stories to share about our shared parent. He, most likely, barely remembers our father or us. My memories are just of annoyance (I was a TEENAGER at the time), so we never got to know each other. Frankly, it was when we became adults that I developed a relationship with my other brothers.
What would life have been like having a father during my adult years?

And even so, I still miss my dad.