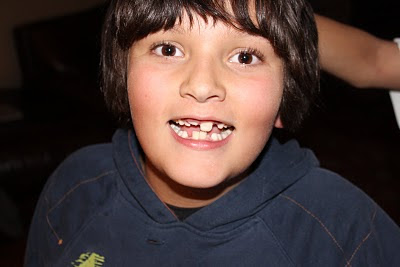 Isaac lost another tooth the other day. He said he was opening one of those bottles that you're supposed to open with your mouth and his tooth flew out.

He didn't believe me that there are no such bottles. Nor did he believe me that you aren't supposed to use your mouth in lieu of any type of tool.
He also mentioned to us that a friend of his told him that you get $15 dollars for your last tooth from the Tooth Fairy. Since this is not going to happen in our house, we tried to convince him that the Tooth Fairy pays kids for their teeth based on the parents' income and maybe her parents were really really wealthy but since we aren't a tooth is only worth a couple dollars at our house (more if it's pulled by a dentist, -- and given the way his teeth are coming in, he may be coming into a bit of money shortly thanks to the dentist -- but still not 15$ a tooth).
And I began to wonder, one: how is this fair (and thankfully, his somewhat A.D.D. -- in the way of most eight year olds -- mind wandered off in another direction and two: how do we get into such discussions?
But what I find amazing is that even though kids compare what they received for Christmas, what they got in their Easter baskets and what the Tooth Fairy leaves them under the pillow, and they must realize there are some serious discrepancies, they still believe. I love that.
Posted by tz at 6:30 PM 2 comments:

POTD -- finally cleaned out my closet

I started this project weeks ago. It's not like it was that difficult. But I think because it was never going to look like one of those awesome California Closets where everything was just so and STAY THAT WAY, I was discouraged before I even started. Today...well today I'm more in a realistic, this is just how it is - mood and I got it done...whoo hoo. I need to stop being perfectionistic about certain things...because it's never EVER going to be perfect and it will most certainly never stay that way! 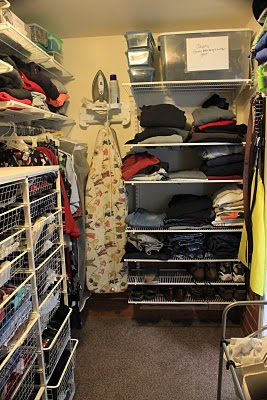 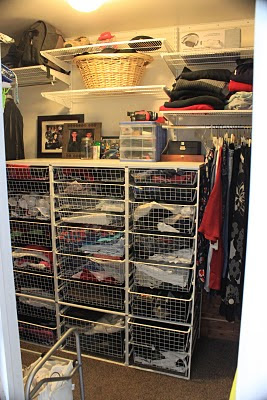 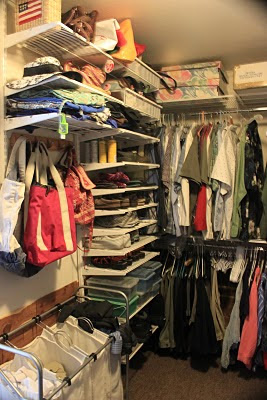 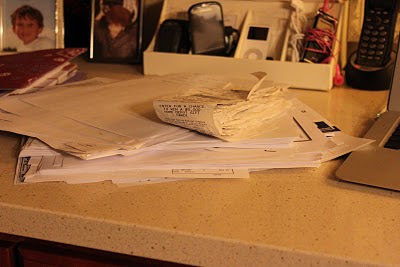 So people complain about paying taxes...me, well I whine about the paperwork....especially because for some reason I always, always lose some key portion of the paperwork. This year it's my W2s and the giving statement from our contributions to Children's Hospital that I've lost.
And in case you don't already think I'm a freak...when I do finally get it all together, I separate all the sections and tab them out with colorful labeled tabs before I hand them to our accountant.
I know, I know, I need therapy.
Posted by tz at 6:08 PM 2 comments: 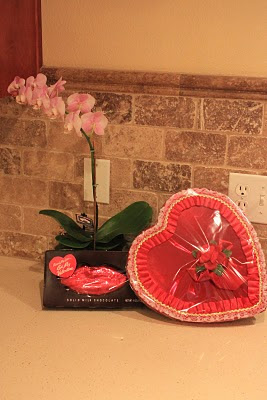 I have the cutest hubby out there!
Posted by tz at 4:13 PM 2 comments: 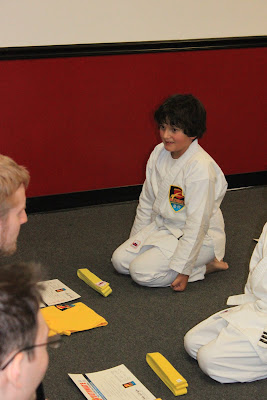 POTD - No one knows how to draw a dog! 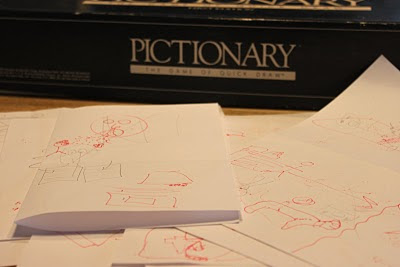 Some of the words we got last night...."interview" - Good Lord, how do you draw "interview"?? (I tried a guy behind a desk...it didn't work). One of the pictures above was Jason drawing the word "contagious", Jay got it just fine (or was it Lindsey, I forgot who was partners with whom at that time), my "contagious" drawing wasn't as descriptive, I think because I drew lines rather then drops.

All of our dogs looked alike and all the dogs looked the same as all of our horses and strangely a lot like Jay's rendition of the United States (he claimed that the "dip" he drew in California was the Baja peninsula, he was just being very accurate)
All in all, it was a wonderful evening of laughter, good food, and wonderful company.
Posted by tz at 8:09 AM 2 comments: 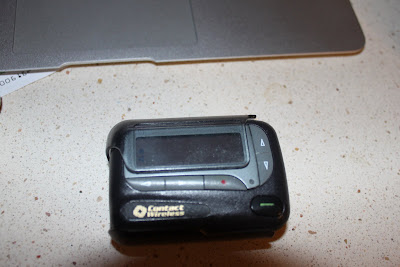 The dreaded pager, I hate this thing. I cringe when I hear beeping sounds, even the beeping sound in my car, indicating my seat belt is not on. When other people's beepers go off I want to hurl something at them (yes, I did get called out last night)

I can't watch Gray's Anatomy any more because their beepers go off ALL.THE.TIME. I swear I have beeper PTSD.
Even when my beeper isn't going off, it weighs heavily on me. I don't want to start a project because I might be called in. I sort of wander around the house in limbo land wondering if my beeper is going off and I have to rush to work.
I love my job. I love helping people. The beeper, is well, a pain!
Thankfully, I have only two more call days in the next two months as I transition into the chronic unit and then I will gladly tie a colorful bow on this thing and return it to my boss.
Posted by tz at 7:18 AM 1 comment:

Labels: being a nurse

blog a picture a day challenge

My friend, Martha, emailed me about a picture a day challenge and it sounds like fun. We'll see if I actually stick with it, especially because it's taken me a month and a half to even start it (to be fair, part of that time was spent prepping for vacation, being on vacation and recovering from vacation....yes, I know you feel sorry for me). So today will be day one of this fun challenge. It's a great way, Martha emailed, and I agree to see what happens in our daily lives. 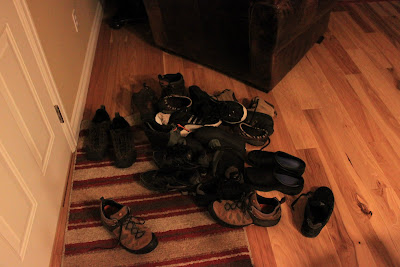 my husband cracks me up

a couple of weeks ago, I had this conversation:

patient: I think there are people staring at me through the window.
me: We're on the umpteenth floor, no one is out there or able to look into the window.
patient: Isn't there a ledge?
me: No, and it's 100 degrees below zero, so even if it were possible, no one would want to because it's so cold.
patient: (doesn't believe me), I'm just going to try and be happy.
me: I think that's a great idea
patient: (starts singing the Don't Worry, Be Happy song and mumbling something about the peas being burned in the oven -- which is crazy talk, because really who bakes peas?).
me: (calls the primary nurse and begs her to bring his psych drugs PRONTO).

I tell Jason this story, he says:

Jason makes me laugh ALL THE FREAKIN' TIME!

disclaimer: I would never ever never ever in a million years ever say this to a patient....and Jason isn't a nurse so we don't have to worry about him.
Posted by tz at 6:39 PM 5 comments: