Because we are leaving today for our awesome weekend away to Ojo Caliente Springs I thought I would spend the day getting "things" taken care of. It didn't go so well. Mostly because I don't stand up for myself.....
First I went into a local place, just behind our neighborhood, to get a wax and pedicure. They switch off ladies and I have never had the pleasure of this one particular person. I laughingly said, "wax my whole face" meaning chin, upper lip and brows.....because really, who waxes their ENTIRE FACE. Well apparently people do because all of the sudden wax was going places where even Santa Clause doesn't grow hair. On a dry, slightly sunburned face....that doesn't feel so good. So my whole face was bright red and slightly itchy by the time she was finished with me. And hubby pointed out, shiny and strangely smooth (not nicely smooth, strangely smooth). Oh yeah...AND they charge you a LOT to wax your whole face.
My hair was also in need of some assistance. I normally don't go into those quickie places because, well, maybe it's my hair? but I've never gotten a good haircut. So why did I think yesterday was going to be different? I showed her a picture and she went about cutting and cutting and even thinned it out a bit....none of this I can see because I wear glasses and have to take them off when they cut. She's done and instead of: 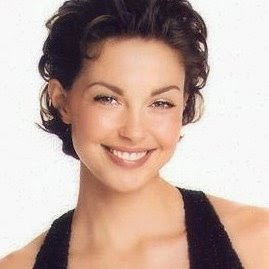 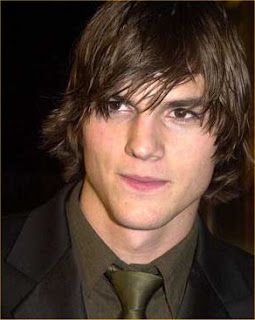 Not that he isn't darling, but not the haircut I wanted. While I was looking in the mirror, I did the tucking my hair behind my ear thing and...get this...she physically removes my fingers from my hair and places it BACK in the position she styled it. I felt like four years old. Even though I didn't get the hair I wanted I paid her AND TIPPED HER. While signing the charge slip I again (and it was an automatic gesture) went to tuck my hair behind my ear and...you are so not going to believe this...SHE 'TISKED TISKED' ME. In some weird compulsive way it was so hard for me not to TUCK. It was a relief to get out of the hair place, get to the grocery store and tuck away.

I do have a normal lady I go to, but she made me mad the last time. I told her I wanted to grow my hair out and she argued with me that long hair doesn't go with my face shape. And she's right, but I'm the customer and I was thinking convenience in the whip it up in a pony tail type of way. So she 'relented' and still cut my hair short in the front and left it long in the back which pretty much looked like a MULLET. I made my sister in law cut off later that day.

Where are all the fun gay guy hairdressers? I do believe I may have to trek into the city from this point on.


The good news? I did get a fabulous pedicure and had them match the nail polish to my cute new flip flops: 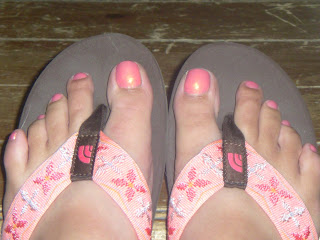 I may or may not post this weekend, I'm not even sure they have an Internet connection there. I think the town is so small they don't even have a traffic light. It will be bliss to be with my hubby of almost 16 years (officially 16, May 29th).

Have a great Memorial Day Weekend to the rest of you!!!!
Posted by tz at 4:27 AM

I am sure your hair looks great really. But I can't believe she pushed your hands away like that!

Have a great weekend!

The pictures were a hoot !!! I so love your toes...wanna know something weird...

I got the same colour yesterday !!!

I can relate to the hair dresser story. Later you just want to kick yourself, don't you, for having paid and TIPPED for something you don't like!

Oh...you are so me!! I always tip...even when it's totally aweful. Redicilious huh? That's the TOO nice me. Then I get frusterated that I did it! Ugh...

I also can relate to the haircut experience in many ways. I got a mullet once too! No joke. When I went in to have it fixed...even the new girl "fixing" it leaned into me and said..."it looks like you have a mullet". Ha! Oh, I tipped the mullet lady too.

And the last visit I had with my previous hairdresser was the same...I wanted a certain style that I had grown my hair out to have...a stack...and because she said that I didnt' seem too confidnet about it...she didn't do it and then...cut it short!!!! I tipped her too... :0)

OMG, that photo of Ashton K. CRACKED ME UP! At least I got something out of it; thanks for sharing your trauma.

Been there done that. I quit cutting my hair as I won't go to just anyone. I've done that 1 too many times and leave absolutely hating it. Every time I find some one who knows what they are doing and that I can trust, they either quit or move or some dumb thing.

Where does that person get off telling you how to wear your hair. My 1st thought would have been to slap her, good thing it is just a thought. I usually am speechless and fumble for words, that I just don't say anything and pay the clod anyways, eeerrrr!!

Have a good weekend!

Did Ashton jump out after the haircut and say, "You got Punk'd!"? Sorry you had a strangely unappealing trip to the Pretty Palace. All the gay hairdressers are in Houston. I saw them lisping their way through their stories everytime Mom got her haircut down there.

I had a pedicure several years ago where the woman insulted me the entire time: "Why aren't your toenails painted?" -it was January! "The way you color your hair doesn't look very good" - bite me! etc. etc.

I gave her a $5 tip, and haven't had a pedicure since.

Why do we feel as though we need to tip bad service? I am always afraid the hair stylists and manicurists have a secret underground where they can give each other the names of the bad tippers and seek revenge on us no matter where we shop.

Congratulations on 16 years... and I'm sure your hair is darling.

So there wasn't internet service in the hotel room, just the lobby, so i will update in the next couple of day...

CRC thanks! and I did get used to my hair

SIS -- oooh, toe twins...that sounds weird
Sandra and logziella...I'm glad I'm not the only one that tips bad service
kissin' glad to be of service ;-)
Chachi....I acutally did that and my hair got really long...then I got sick of it, donated it and have had it short since
Scott...houston's a long way for a great do
ganelle....oh that's too bad, pedicures are my favorite things!
Ohn...I KNOW..and boy did it hurt!
Dodi---officially 16 on the 29th and yes...hot eye...it was fab

The whole face thing just sounds way too painful! Sorry you had to endure that. And what is up with the pushy stylist?! Aren't you the one that is supposed to be comfortable with how it looks? Goodness! Cute flip flops though!