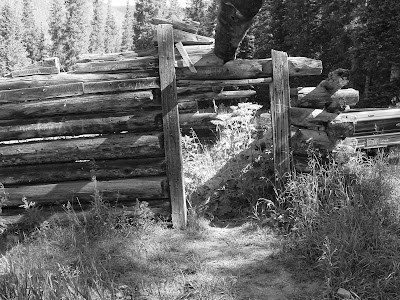 Benson Cabin, Shrine Pass
Yup, forecast for the mountains, snow. Here on the plains, just a bunch of rain. I LOVE THIS SEASON...seriously, I love rain, I love cloudy days, I love cool breezy weather. Have you heard of Seasonal Affectiveness Disorder (SAD)? It's where you get all gloomy and sad in the winter and happy in the summer. I used to joke around that I had reverse SAD. Well, turns out it's less common but there are people out there who do (just read it in my psych book). That's me! Anyhow, I'm seriously procrastinating writing a paper for my psych clinicals. I had to hang out with a person who has schizoaffective disorder for a couple weeks and then write up a whole paper on him. I had to chat with him before I read his file and when I talked to him, it was this fun conversation about nothing real, since he's totally delusional, but he was clever and nice. Then I read his file and he was there for physically assaulting his last nurse. YIKES. This clinical has really really been a hard one. I feel so awful for these guys, in a different way then the people who are sick with physical ailments. Mostly because there's not much I, personally, can do for them. I think it's a very special person who can be a psych nurse. I am not that person.
Anyhow...we went to Breckenridge last weekend to celebrate Jason's 40th. He's not one for parties and fan fare so this was a perfect way for him to celebrate this new decade of his life. I thought I'd leave you some pictures. And if you want another clue, you'll have to look at my vacay photos...bwahahaha, evil laugh. 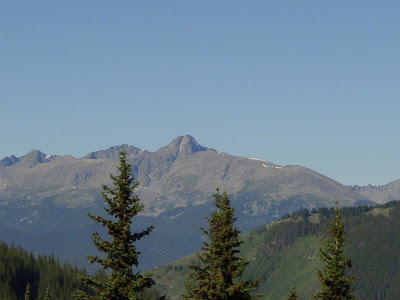 View of Holy Cross from the observation deck, off of Shrine Pass. When it snows you're supposed to be able to see a cross in the rock. It's hard to see without the snow though.This deck is actually a very nice hike and wheel chair accessible. It's a new project they're doing, making hiking paths that are available to all. 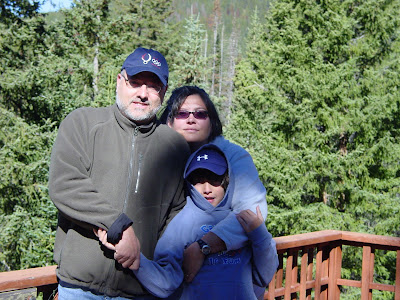 Isaac had the camera, it was pretty cold and we were huddled together. 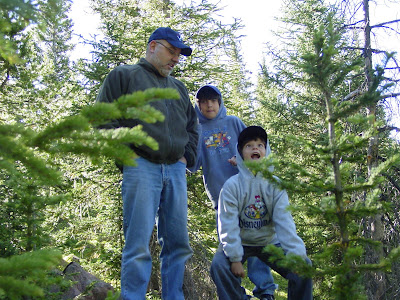 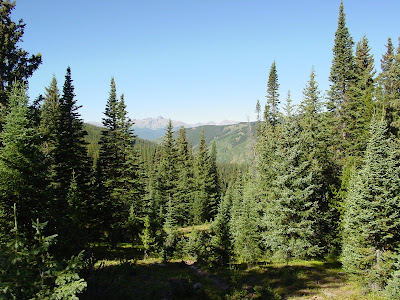 We took another hike up to Holy Cross City...but it turns out that was a good four hour hike (one way), so we didn't make it. I actually only hiked an hour, went back to the car to study and the boys explored some more. It's a really hard hike, and probably best to have actual hiking shoes, not tennies. Next summer, we'll try that hike first. Holy Cross City is completely abandoned but at one time had 300 people there, a school, church and post office. There's still a bunch of mining equipment left along with the houses and buildings. There were no roads to the town, they had to hike in or use horses.
Let's see, another clue....hmmmm, Across mountains, valleys, rivers and oceans
Oh, alright, I've procrastinated enough...off to write my paper....ugg
Posted by tz at 6:56 AM

From my experience I(which is quite a lot), Psych nurses are a special breed. In a lot of cases you wonder whether they should really be a patient! I guess that is what makes them good at it.

Love the pics! So pretty!

CRC...someone told me this one once...the difference between psych nurses and patients is nurses have the keys...

ganelle...ooh cookies...and bannana bread, nothing like bannana bread baking in the oven on days like these...I think I'll go make some..just another way to procastinate :)

Bite your tongue, you did NOT just say SNOW!

Alright, I have to agree. Snow in those mountains would be gorgeous! What a beautiful place!

I love the changing of all the seasons. And this time of year, I do love the cool rainy days. Not only perfect for cookies or banana bread, but for naps under a fluffy throw too!

You are so blessed to live in an area that has such wonderful views!

I think you'll love it here on Oregon. It's rainy and gloomy 9-10 months out of the year. But so far, it has been a great September. Sunny, warm, and dry.

I have also told people I have reverse SAD. I love rainy gloomy days and when we are snowed in and the boys schools were closed, I was like a little kid. I love being inside in cozy sweats or an oversized fleece blanket watching the snow fall. I dread the heating bills though :)

I think those Nurses are really special as well.
I hated mental health...and I am sure I passed by the skin on my teeth...

I'd love to read an excerpt!

I felt like a psych nurse today at school...I have one particular kid who is driving me nuts! Did I say NURSE? I meant PATIENT!

OMG - I haven't even had the chance to talk to you about the psych stuff and you know it's my favorite. So sad to have to read your blog to keep up!