We've slowly (excruciatingly slowly) been digging ourselves out of our basement. Yesterday I found a box of Jason's old (and I mean OLD) college notes and papers. I asked him if we could toss them.
That didn't go over well.
I reminded him that we were BOTH committed to getting the basement cleaned out and I've been tossing a ton of stuff (I didn't add because I was so much more 'together' then he was, but it was implied).
He replied that what he meant about cleaning out the basement was me getting rid of my stuff and keeping his stuff, because his stuff is worth keeping....
Really? -- 19 year old college papers? I was okay with the Star Trek TV guides (I'm a push-over and I love him and his geeky obsessions)...but 19 year old college papers and notes? 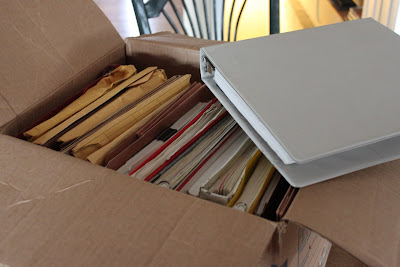 He finally decided to go through them and only keep some projects and papers that he wrote and is getting rid of all of his class notes.

Looking through the notes he's realized forgotten so much since he doesn't use a lot of what he learned in College (although, I'm sure it all provided a wonderful foundation on which to build and that's why he is where he is now). 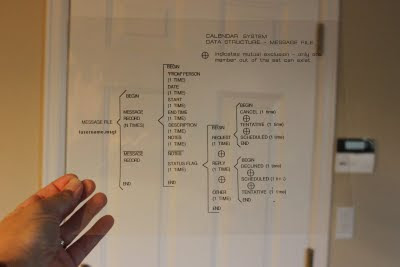 Part of his senior project...BEFORE PowerPoint..he had to transfer his flow charts and whatever else onto transparencies and present them to his class.
How many of you remember transparencies?
He eliminated about 3/4ths of this box....
Progress. At this rate, will have the basement cleared out in five years.
Posted by tz at 7:08 AM

My husband was the very same in this same confrontation. Please let's get rid of the binders of college notes....no. I made him repack them as well and some did go out the door.

Hehe. You are so not alone. I keep "organizing" my boxes, but tend to get distracted before actually going through the papers. And none of the Trekkie goodies ever get tossed, thankfully there very few in number. ;)

Remember transparencies? Some of us still use them regularly!

I good transparency in the right hands is far better than any PowerPoint presentation...