Here are my answers to some random questions:
1. Name someone with the same birthday as you.   I can’t think of anyone famous, but a friend from nursing school, Denise, has the same birthday.  When we could remember we’d try to have lunch together to celebrate.
2. What has been your favorite age so far? I’m liking my 40’s.  I’ll like them a lot more when I’m done with my Master's program.
3. Where did you meet your husband? I was working in a dry cleaners when I was in high school.  Jason came in to be his friend’s wing-man, the friend was trying to pick up my friend who was also working there.  They never got together, but Jason and I hit it off.
4. How many children do you have? 2 boys -- they are my life
5. Have you ever sung in front of a large number of people?  No, but I did read one of my poems in front of a café crowd during a poetry reading.  It was one of the worst experiences ever.  I am not, nor will I ever be a public speaker.
6. What’s the first thing you notice about your preferred sex? Eyes, color doesn’t matter they have to look kind.  After that, looks don’t matter at all they just have to be smart and funny (I’m lucky to have the entire package, beautiful eyes, great smile, super funny –he makes me laugh all the time – and he’s smarter then I am)
7. What really turns you off? People being mean.
8. What do you order at Starbucks? Grande non-fat Hazelnut Latte.
9. What is your biggest mistake? Ooooh, so many.  The biggest right now is not taking care of myself, eating too much and not exercising.
10. As a child, what did you want to grow up to be? So many things, even now I’m not sure there are just so many things to do.  I always thought it would be fun to major in ‘level 100s’ and know a little about everything.
11. Say something totally random about yourself.  I have to have my feet covered when I sleep.  It’s a throw back to being afraid of the monsters under my bed…apparently my child brain thought I was protected by the sheet.
12. Do you still watch kiddie movies or TV shows? Only when I have to.
13. Did you have braces? No.
14. Favorite Social Network? Right now I’m really hooked on Pinterest.com  It’s a great place to ‘pin’ things you find on the web that you find interesting and you can retrieve the info later.  It’s social because you can ‘follow’ other people’s boards and see what they find interesting.  Not as much interaction as FB stalking or blog friendships, but it’s a great way to procrastinate.
15. What is the most romantic thing someone of the preferred sex has done for you? So many…I swear those nights when I’m dead tired and Jason does the dishes.  It seems like such a small thing but my ‘love language’ is acts of service  and for Jason to do that little thing it makes me feel loved and cared for.
16. When do you know it’s love? When you draw a stick line in Pictionary and the other already knows what you’re about to draw (Jason and I can’t play as partners anymore because people think we cheat)
17. Do you speak any other languages? Not anymore, Spanish was my first language (well bilingualish) but my parents stopped speaking it and I didn’t remember any of it.
18. Have you ever been to a tanning salon? Before my wedding, I wanted to get a good base going so I wouldn’t burn when we went to Mexico.
19. What magazines do you read? Decorating and Cooking magazines.  Someday I’ll have time to do those things again.
20. What is playing on your iPod right now? Rolling in the deep by Adele.  I don’t know what happened but somehow my Ipod and Jake’s (my 12 year old son’s) I-pod music was combined.  He’s not too happy about it because really what 12 year old boy wants ABBA on his play list.
21. Have you ever ridden in a limo? Yes, went to Mexico a company retreat and a group of us went into town in a limo, it was cheaper then using a bunch of taxis.  It wasn’t as glam as I thought it would be.
22. Has anyone you were really close to passed away? My dad.  I was nineteen.  I still miss him.
23. Do you watch MTV? No.
24. What’s something that really annoys you? Mostly myself. I need to learn how to shut up sometimes.
25. Which television show were you sad to say goodbye to? Big Love – my fascination with polygamy borders on obsessive.
26. Can you dance? Nope I have the girl version of white-man-overbite-syndrome (I take more after the WASPy side of the family rather then the Cuban side in this respect)
27. What’s your favorite place in the world? This is not a fair question.
28. Have you ever been rushed by an ambulance into the emergency room? No – thank goodness.
29. If you could meet anyone (dead or alive) who would it be? Also, not a fair question.  Maybe Jesus, I would like some clarifications and frankly would like to make some suggestions.
30. If you could change one thing in the world for your child, what would it be? I hope they have a world….. 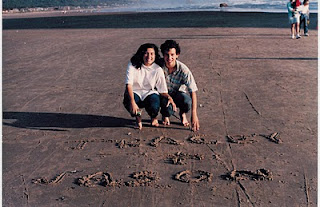 Jason and I in 1986
Should you find these interesting questions and also want to answer them for random strangers I would love to see your responses, so let me know in my comment section so I can come by.
Posted by tz at 6:12 AM

Love it - especially meeting Jesus and making a few suggestions! Only a woman could think of that!

I'm going to steal it. I need something to kick start me back into blogging again.

Don't have a blog, of course, but really loved reading all your responses and thinking of what my own would be! :)