The Before
I have no idea why the previous owners picked these colors and why oh why have carpet in a bathroom  -- and blue carpet.  It feels so unclean to me.  This was one of those, must look beyond and see the potential.  Okay this whole house was like that.  The master bath and the master bedroom were that on steroids.  The master bedroom had the same color, blue carpet and --I kid you not -- red moth eaten velvet drapes. 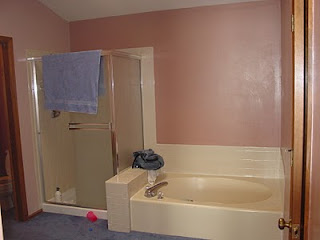 The After
It took about two years of living with the above and then about a year of working on it.  It was a combo of us doing things ourselves (okay, who am I kidding, Jason did all the work) and hiring out some of the other stuff.  Me? I picked the stuff out, it's really hard work, honest. 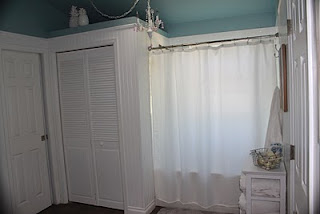 We took the shower out and built a closet for the washer and dryer.  We made our bathtub a tub shower combo.  For us it was a much better use of space and it brought the washer and dryer from the kitchen to the second floor.  Yes, you read that right, the kitchen....did I mention this place was a major fixer-upper? 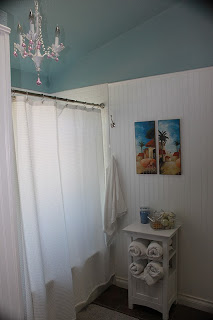 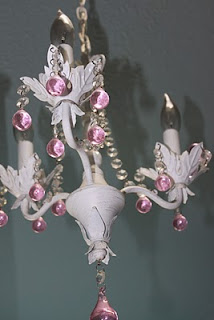 This was my ten dollar buy at Lowe's.  Love it, with two boys and a hubby I so rarely get to splurge (and ten dollars, not really a splurge) on girlie things.  The big burly guys who moved in the washer and dryer loved it, one took a picture of it with his phone.  Whatever floats your boat, I guess. 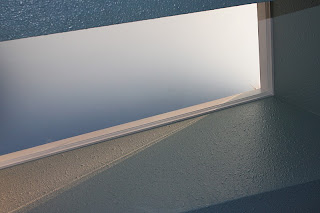 This skylight was already in.  The thing about sky lights in the bathroom is the steam collects way at the top and bubbles up the paint.  There's also metal holding the glass and it gets little rust dots.  Jason treated it and then put in some moulding, it finished it out pretty nicely and we don't worry about the paint chipping and bubbling any more.  I love my brilliant husband. 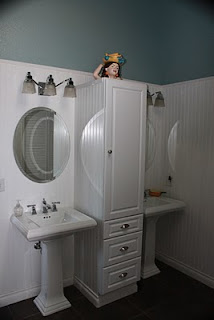 I can't find my before picture here.  But it was two sinks and a vanity and it got so cluttered!  So we did two pedestal sinks and a cabinet.  I'm not going to show you the inside because that's where the clutter went.  We did put in two outlets in the shelves for hair dryers, tooth brusher, razors, etc.  That was my idea (see I did work on this project).  Jason did the wiring and putting in the cabinet, paneling and sinks.  He's handy. 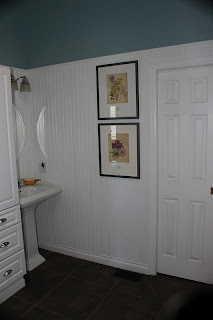 Funny story, Jason got a new toy for this job, a nail gun.  He got so nail gun happy with the paneling that he didn't realize he nailed the sliding door into the wall.  Oh were choice words flying there for a day or two.  He's still handy and brilliant though. 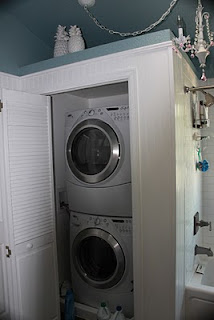 Our washer and dryer closet.  We kept the shower floor in which we thought was a good idea until we realized that only one brand would fit into the space.  Next time we would rip it out and get one designed for washer and dryers.  Live and learn. 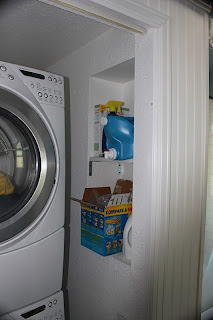 Jason built in some shelves for detergent.  Handy. 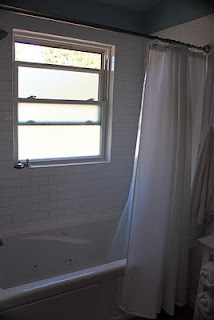 We also put a window in in the bathroom to get some more ventilation and light.  We put in a jet tub and subway tile...love that look.  The floors are eighteen inch dark gray porcelain tile.  We hired out the window, tiling, mudding and taping the closet and texturing the bathroom, everything else Jason did.  He's a saint.

So happy with it.

It looks wonderful! My master bathroom is a travesty. As I am similarly blessed with a handy husband, we have lots of plans. Eventually they'll come to fruition.

Meanwhile? I have plenty of time to shop :)

Beautiful!!! Love the chandelier.
I just would never even think to make such big changes. It's truly a talent.

It looks wonderful!! I am so glad you got it all done and it is beautiful!!

It looks beautiful. I know you are glad it's done. Great job, I love it.

Absolutely lovely! Really appreciate you linking up this great bath post at the Roomspiration blog party. Btw, I am admiring all your creativity in your blog so may I invite you also to join us at Creative Bloggers' Party & Hop? Hope to see you there at the party :)