Isaac had his first karate tournament this weekend.  He did great (I'll tell you how great in a minute).  First, I'll tell you a little bit about my observations.  We live in a great suburb of Denver.  Even so, not everyone (say everyone in your head like an East Coast snob) thinks our area is as great as I think it is.  I read on a Facebook page about Centennial that the people in West Centennial don't think we should even be a part of the city and we don't count (although, I do believe our taxes help generate quite a bit of the income the city has...but whatever).  There's also Highlands Ranch which is south and west of where we are and it is the most lily-white-republican-need-to-be-perfect-better-then-the-joneses-stepford enclave in the Denver area.  I mean this area is the polar-opposite of the People's Republic of Boulder.  I am a person of color (when I say that, I mean in personality as well as having an olive complexion) in Highlands Ranch.  I seriously wonder if they want me to use another drinking fountain whenever I visit an establishment in the area.
The Karate place where Isaac takes his classes has two dojos in Highlands Ranch, one in Greenwood Village (the people that Highlands Ranch people want to be), one here in the slums (not really), Aurora and Denver and some other suburbs that don't really matter to my conversation (but really do matter in life).  What's our area like? Well laid back.  Most of the people out here are also conservative, but there is nothing in our neighborhood covenants that preclude our more liberal brethren from living here (thankfully because then I'd have to live in Boulder and the commute would be horrible).  Some of us wear make up some do not, we wear a lot of sweats and are not always color coordinated.  I feel so at home here.  Just real people, raising families, enjoying life -- no pressure to impress.
I forget there are areas that aren't quite like ours.  Which brings me back to the tournament.  We got there early, got our seats and waited for Isaac to preform his karate moves - called a Kata, but really a choreographed dance number with some yelling of "KEE-EYE".  Isaac has informed me that I am not allowed to call it a dance number though.  I have my hair up in a couple barrettes, barely combed because we were running late.  I have my suburban mom uniform on (beside scrubs there's nothing else in my closet), consisting of a white t-shirt, black velvet hoodie, khaki capris and flip-flops.  NO MAKEUP.  I still have writing all over my arm because I had a patient crash on me the day before and had no paper to write all my information that I needed to chart.  I did have a really cute new coffee travel mug with me though.
And then I saw a family prance in.  My first thought is, these guys look just like the girls (and I'm so about to get geeky here) from the Harry Potter movie about the wizard championship.  The girls that float into the big Hogwarts hall and sigh every couple of feet.  The girls at the karate tournament weren't wearing gray form fitting dresses, they were in their nicely ironed Gis (okay, I do feel bad I didn't get it together to iron Isaac's Gi, it was a bad day the day before, remember I mentioned I had a patient crash on me, had to call the paramedics --who by the way, were kind of hot -- men in uniform, doing what they do best -- oh I digress).  These girls had matching pink paisley bags for their sparring stuff and sparkly pink flip flops.  Their mom had her hair perfect (even with major loads of expensive product I couldn't get my hair to do that in a million years) with the perfect amount of 'bling'.  She was wearing what I'm sure was expensive designer stuff, and if I followed that stuff, I'd probably be impressed.
My first thought, these guys took the nerdiest sport in America and made it all cute and glitzy.  They so had to be from Highlands Ranch. 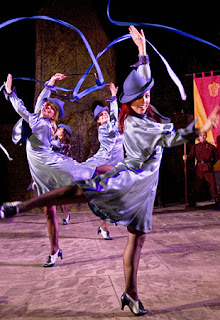 Because from our area, the kids looked more like this: 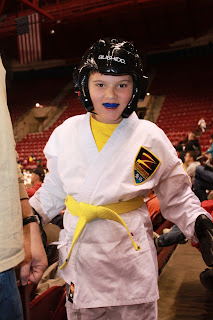 I asked myself, because I'm wise and self-reflective -- no really.
Am I jealous?
Maybe a little, even if my travel coffee mug was way cuter then hers.
Then I thought about our laid-back albeit hectic life, how great my kids are, how wonderful my husband is and realized, wouldn't trade it for the world...even a smokin' hot body in designer clothes and perfect hair.

And then I sat back, relaxed and watched my kid from the wrong-side-of-Centennial smoke those other kids'...um...behinds. 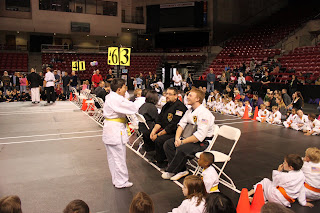 Isaac bowing to the judges. 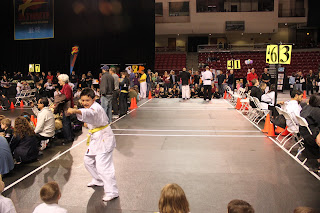 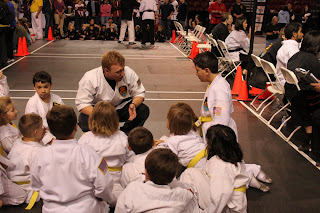 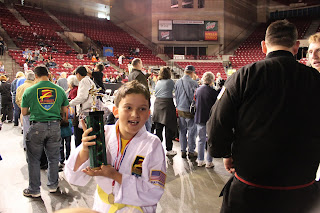 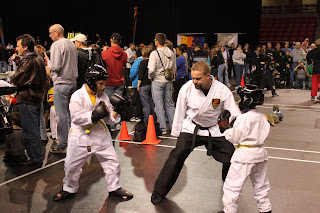 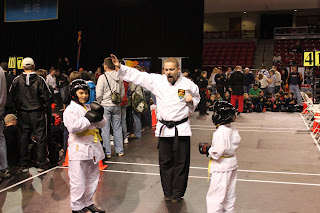 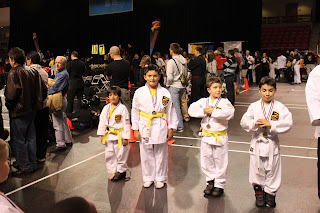 We did try and get him in the older kid section because we thought it would be more fair, but they were strict about age groups.  Here he is with the other 7-8 year olds.  He's freakin' HUGE, compared to these guys.  We did warn him though not to count on his size...see the littlest guy there, he's the first place winner, Isaac got second (although it was really close). 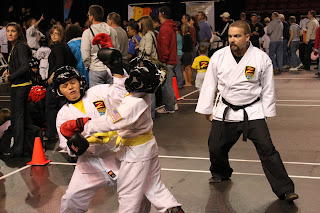 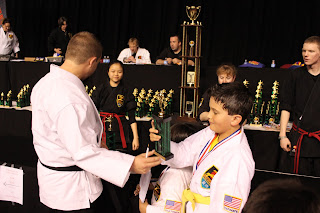 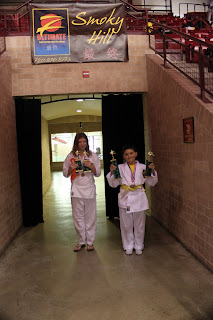 OMG Tracey you crack me up !I think I curse (often in Welsh)for too much, sometimes at the dog and sprogs, to be a HS Stepford. Try bloody hell in an imperious accent!
Please become a writer contributor to a lefty paper in your next career reinvention.

I love that this is true everywhere. I live in a great area, really, a GREAT area of south St. Louis but you'd think I had leprous sores all over my body (and car) when I go out to Sophia's dance studio. Geography is, again, destiny.

And it is always nice to be a victorious underdog, even if the underdog status is really only about street addresses.