Where did the last 12 years go? 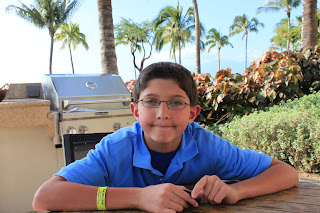 It's been quite the crazy couple of weeks.  First...my first born baby turned 12 at the beginning of the month.  WOW.  I'm not sure where the last 12 years went.  I swear it was just yesterday he was handed to me in the hospital and I thought to myself in a panic, "OHMYGODWHATDOIDOWITHTHIS?"  I'm still trying to figure that out.  It feels parenting has gotten harder, not easier.  I have to say I've really enjoyed the journey.  Maybe I'm just supremely lucky to be blessed with such wonderful children.  Jake is funny and sensitive (so not allowed to say that).  He's smart and good in sports.  And he's adorable.  That's not just me, his mom, saying this....just ask any number of the 5th grade (oh, ooops, I guess technically he's now 6th grade) girls what they think of his eyes. 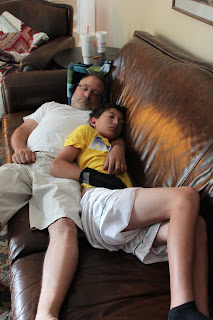 He wanted a low-key birthday this year.  Just Chipotle and movies.  He wants to take a couple friends camping with dad and Uncle Glenn (and cousin Bridget, who to Jake is one of the guys).  On his birthday he napped.  I suspect he's going through a growth spurt.  The last set of shoes we bought him were a size 10 men's.  I think he's growing all the time! Notice the brace on his arm...well he was running and tripped and landed on the cement on his hand, which was in a fist.  At first the radiologist said he was fine, no breaks.  Then the Sports Medicine doc, who we went to see about Jake's knee (which is fine, turns out a combo of growing pains and being active) took another look at it and thought it might be broken, so we needed to take another set of x-rays in a week.  Well those x-rays were done yesterday, and yay, no break!  This was particularly troublesome because Jake's team, who only did okay during the regular league games were undefeated during the play-offs and made it to the championship game which is THIS Saturday.  And Jake's favorite position to play -- pitcher.  So we're all happy -- on so many levels -- that Jake's hand is not broken.  Oh, he was on his way to the library, so now he tells me, "see mom, knowledge is dangerous".  He's a funny guy -- well he makes me laugh at least.
Not only did my son have a birthday (and my brother, his is the 3rd, happy birthday Jose...hope the Navy finally figures out where they're going to send you so I can send you your present) but our nation was celebrating too.  Love our neighborhood, they have a little parade for the kiddos, who dress up and decorate their bikes.  Then our pool has a bunch of games to do with the kids.  It was a fun afternoon (so glad I got the day off). 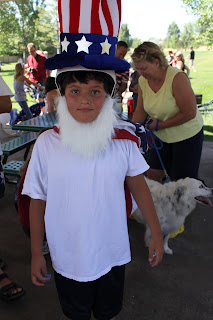 First of all, great kids don't just happen, so you must have done a few things right in the last 12 years!

Sounds like your guy is growing like mine do - my 12 year old is taller than my wife and catching up with me...

Knowledge is dangerous - love it!

You are right about the time passing - my first was born 24 years ago this coming Monday!

Yes, my boys spend a lot if time killing Zombies too. Wish I had the time to play too, it looks like great fun!

The sam guy who wants people. THAT is hilarious.