Not to be outdone by Colleen and btw...who does she think she is? Superwoman? I have also made a list of my accomplishments:

Probably just as many hours of looking up bathrooms on 'rate my space' ...come on, it's research, we are redoing our bathroom

I have 'opened' my nursing text book and have 'glanced' over a couple of the pages.

I've caught up on my favorite blogs, even commented on a couple.

My Christmas decorations are half put away.....

So there you have it...a list of my very productive week...now go read Colleen's blog and then you can see what a real slacker I am.

I kinda feel like commenting on New Hampshire right now and how the people that live there seem to have a great bit of common sense....on both sides. But, I so don't want to get into a debate...does it really matter? 48 more states to go....I just hope they don't interrupt prime time programming again to say...2 more people just voted and the front runners are exactly the same...it's okay to wait until there's actually SOMETHING TO REPORT.

Then there's Dr. Phil and Brittany.....(rolling my eyes right now), who is the prima donna here? And then there's the spokeswoman for Jaime and Lynn (have no idea how their names are spelled and only just now realized that their names make up the name of the pregnant teen daughter...I don't normally follow this stuff, but hey it was on the news, it must be blog worthy---right?) anyway....spokeswoman, asks America to pray for the family, and yeah they do need prayers but frankly they need help of the earthly kind, preferably with a PhD or an MD behind the name of that help.... and yes they have been vilified by the media and the public because their children are acting like idiots! and it's great that daddy prays before work every day....but really should I excuse what a mess the family is because he prays? I'm all for faith and prayer, I rely on both myself...but there's also the whole take responsibility for your actions and how your kids turn out.....and as I write this, I'm saying a little prayer that my kids turn out okay because I'd hate to eat crow later...hahaha.

That was one long run on sentence...whatever

OK, fun stuff, there was a great read in the most recent issue of Wondertime (a fun parenting mag) about moms that blog. You can check out the author's actual blog here.

And so you don't think I'm just about making snotty comments about celebs and politics....I have to relay, what I think is a cute story, about my youngest...

We passed a jeep with antlers on the front (fake, fuzzy ones for Christmas) and I pointed it out to the kids (mostly to distract them from their bickering---funny thing, I HATE the sound of bickering) and Isaac pipes up..."I know why they have those on there". Curious, I ask him why and he answered "So if the car goes off the cliff it could fly" I LOVE THE WAY THAT KID THINKS....and you should have seen his little face (through the review mirror, I was in the car), it was so earnest, so sincere....so I agreed with him. 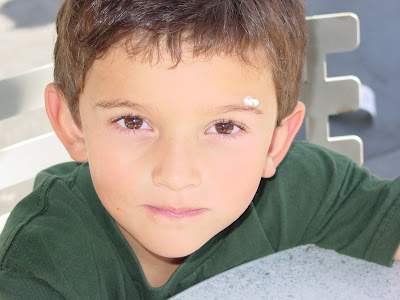 I think your achievements this week are just the kind of things you should be doing right before school starts. I like to call it "relaxing" and I like to stock up because I know it will be in short supply until May 5th. :)

thanks denise....i'm scrambling today though because i'm supposed to have 200 nclex questions filled out and i have to finish my reading by tomorrow because rumor has it she gives us a pop quiz the first day...still want to go to nursing school?????haha

This from the boy who will argue ad infinitum about the existence of invisible brothers? Or is that Jake who gets really bothered? I don't' think I told you about how LIVID Kyle (weekend with the William's) was about the imaginary brothers. But C converted him in the end.